EMOTIONAL STROLL THROUGH THE ARCHITECTURAL CHARM OF THE ALHAMBRA PALACE 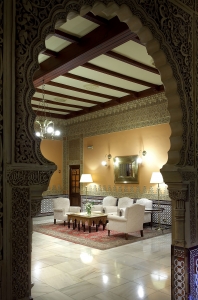 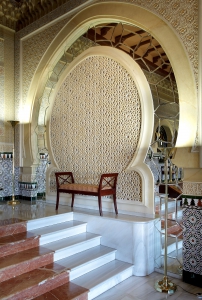 With Granada at its feet and the Alhambra ‘levitating’ above it, this 5-star hotel is a decorative work of art where emotions flow.

Palatial hotel… or palace of dreams? The Alhambra Palace leaves no one indifferent. From the outside, it impresses with its crenellated and curvilinear structure, evoking the walls of Avila: strong, robust and not very high. And once inside, it captivates by the intoxicating beauty of a neo-Arabic style raised to perfection in every corner, in a unique and seductive Alhambra baroque style.

Because the sensory experience of this 5-star hotel goes far beyond what any hotel establishment can offer. Here every moment is lived with intensity and passion: from breakfast to dinner, from the relaxed coffee to the exciting drink, from the walk through rooms and corridors admiring a thousand and one architectural details … to the ‘spiritual retreat’ in rooms where sleep is only a (small) part of the dream.

Tinged with ‘galatea orange’, it evokes the external appearance of the Alhambra in Granada, whose name it takes… and to which it does honor. The Alhambra Palace is a true hotel palace. One realizes this as soon as one crosses the threshold of its door, admiring its three brick horseshoe arches. The reception is veiled under the starry ceiling of painted plasterwork, simulating wood, and an impressive octagonal glass dome filters the natural light, which shines in a special way to caress the white marble of the pavement.

A large semi-pointed archway, stuccoed and decorated only with moldings, opens onto the spacious lobby, which also captivates with its scenography as the nerve center of the hotel. The hall is profusely decorated to avoid the ‘fear of emptiness’ of certain periods, including the Islamic era. The hotel’s eclectic style is also evident here, with a staircase that gives a classical,

Renaissance and palatial feel, reinforced by its powerful handrail. A simulated alfarje serves as an immense sky while the muqarnas (ornate vaults typical of Arab architecture) surround the space and colored glass decorate the natural light. Also arches, many of them blind, upholstered by suras are cursive epigraphy, mirrors, mosaics … all a fascinating decorative environment that transports to the dreamlike world of the ‘Thousand and one nights’.

The Dining Room is the setting for lunches and dinners, with regal columns that appear to be made of green marble, with octagonal capitals. And the curtain walls open to the outside through glazed arches, some of them colored. The entire interior of the Alhambra Palace is pure decorative ornamentation that enraptures the eyes with the beauty of narrow columns attached to the walls, with Nasrid capitals, flowers, birds… and framed mirrors on the side walls that flirt with a Versailles style. A roofed sky, with large twelve-pointed stars, accompanies with a vintage color; and in all of them, gilded copper lamps, like quinqués, offering lights of tenuous delicacy…

A close look at the main rooms shows that Granada is at the foot of the hotel and the Alhambra at its head. A Greek cross is its floor plan and side rooms, like chapels, is the Hall of Kings and the bar area. And the arms of the transept are corridors through which the hotel spreads until a small staircase enters its heart. And a majestic panoramic terrace is the best box from which to admire the Nasrid capital in all its splendor. Palace hotel… or palace of dreams? Simply… Hotel Alhambra Palace!