Discover Granada with all five Senses 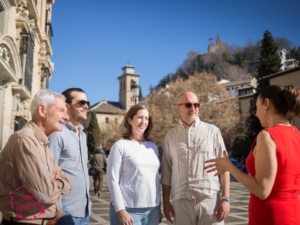 Discover Granada with all five Senses

Granada, a crossroads of cultures and the most beautiful sunsets in the world, is one of the cities on every traveler’s bucket list, and we are sure that with an insider’s view of all it has to offer you will form an emotional bond with the city that will outlast your visit.

The smells, colors sensations that mesmerize you as youtake in the panoramic views of the city, is only the beginning. Would you like to accompany meand discover the most exquisite magical cornersof the city?

I am Antonia, I’m your companionon this adventure of touring the streets and most uniquehistorical sites of Granada, so that you can enjoy its culture and gastronomy authentically.I assure you that you will leave the city with the pleasant feeling of having lived Granada as one of it’s own locals.

As a base to discover the city, nothing beats staying at the Alhambra Palace Hotel which offers the maximum comfort in accommodation, and is an unrivaled institution that has served the needs of travellers for decades.

Personally speaking, it is a place that encompasses the city’s ethos. This unique hotel is part of the local heritage of feelings, historical memories and emotions of Granada and should not be overlooked in the agenda of any traveler interested in going a step further in their visit.

We offer you a tour inspired by Granada through this distinguished hotel for its history, corners and values. We also offer an array of proposalsto discover Granada througha myriad of experiences.

Alhambra Palace´s Hotel, the hotel that symbolize Granada itself

As the book on the history of the hotel reflects;“Its historical style attracted minds from all over the world. Travelers, kings, nobles, scholars, artists … who sought in Granada, a place to dream rather than simply sleep. ”

The establishment since its inception has reflected art in all its manifestations: music, literature, painting, and performing arts. It has welcomed dignitaries and international figures that can beconsulted in the Golden Book, where they are mentioned among others.

Some of the milestones you should not miss are:

It’s beauty; soft light and views stir an enchanting spiritual experience for travellers. Would you like to be swept away by such an experience?  You might be asking yourself what else does this city have hidden for us to discover? Allow me to introduce you to the quintessentialfeatures of Granadian culture that are infused with deep cultures, roots and customs that unfoldfrom every street corner.

Would you like to experience Granada with all 5 senses ?

Let Granada travel through you. I encourage you to stroll through its streets with the smell of spices and teas, which permeate an aroma that transports to distant places.

Visiting Granada is a journey through time through the five senses. Each sense is heightened with their matchless historical, artistic, gastronomic richness and natural environment.

Savor Granadaprovides a personalized experience from the deep knowledge of the culture and daily life of the people of the city with meticulousattention to gastronomy, which offer a faithful reflection of the mixture of cultures and traditions combining the senses of sight, smell, taste and touch.

What can Savor Granada tours offer you?

Apart fromour range of thematic tours, whichcombine gastronomy and cultural, you have the option of personalizing any of our proposals for your own comfort orto book in our main suite tours calendar.

One tour we especially recommend and suggest you not miss is our authentic tapas tour of Granada through the most acclaimed restaurants in the city.

A tour of the traditional taverns of Granada to learn tips on where to go for tapas from a localperspective. Tapas tours are an excellent way of socializing, rooted in Granada cuisine and drinking culture, which sets it apart from other regions in Andalusia. It is an enriching experience for the curious traveler who discovers through small bites flavors that reflect local produce, lifestyle and the Grenadines traditions.

Among other gastronomic proposals we find the wine experiences .

Andalusian Wines: In this wine tasting you will try the most representative wines from the region, ranging from red wines to Wines from Jerez and Montilla. All of them perfectly paired with products such as cheeses and artisanal sausages, meats and vegetables from local establishments. These tastings will allow you to discover the diversity and richness of Andalusia and the history of its wines.

Among Savor Granada’s cultural proposals you will find different tours among which are:

The Alhambra and the Heritage of Granada:

The two greatest exponents of this heritage are The Alhambra and the Generalife. However, we must not forget to explore their magnificent Renaissance monuments and impressive baroque churches. Like La Catedral, El Monasterio de la Cartuja or El Monasterio de San Jerónimo among others.

The essence of Granada and the landscape environment through its magical viewpoints. Source of inspiration for painters and writers

Get to know the magical places that inspired Federico García Lorca’s work. His birthplace in the town of Fuente Vaqueros and Huerta de San Vicente where the summer home of the García Lorca family  was located between 1926 and 1936.

Don’t waste another second follow your wanderlust and book now! We facilitate online booking of the proposed tours in 3different packages.

Through these depictions I hope Ihave inspired you to embark with me on this journey. Let’s lose ourselves together in this magical place. Check in at the Alhambra Palace Hotel and let Savor Granada take you on the trip of a lifetime.