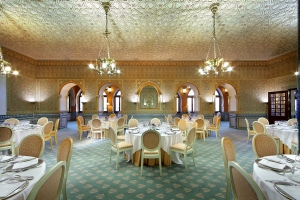 Why does the Alhambra Palace live up to its name, taken from the great monumental landmark of Granada? It is enough to cross its threshold and stroll through its halls, corridors, rooms and bedrooms to realize it. But, while it prepares to reopen its doors this summer, this true palace of the hotel industry opens a virtual window through three videos that not only show all its Andalusian essence but also allow us to know how its centennial history began. If a picture is worth a thousand words, these videos are, without a doubt, an encyclopedia of emotions. The best appetizer before living the unforgettable experience of staying at a hotel that has welcomed kings, politicians, artists… and the greatest myths of golden Hollywood. Eyes wide open…!

Inaugurated 111 years ago with a very special master of ceremonies – King Alfonso XIII, great-grandfather of our current monarch, Felipe VI – the Alhambra Palace has been a faithful witness of our history during the last century. And as such, it has been able to overcome the most delicate circumstances. As during the Civil War, when it became a field hospital for three years. But it knew how to rebuild itself. And precisely from the forties onwards it started its most glamorous period, welcoming personalities from royalty, politics, arts, science or cinema, as host of great legends such as Vivien Leigh, Yul Brynner, Lauren Bacall or Rock Hudson.

Now it has also had to suffer the most difficult health situation of the last century due to the pandemic… but it has faced it with the same fortitude as always, taking advantage of this lethargy for an intense in-house work of technological renovation and health protocols to adapt to the new times without losing a bit of its original palatial glamor.

And while the last details of its reopening are being finalized, it invites those who wish to discover the magic that lies within thanks to three videos that are a window to the illusion. Some ‘virtual tours’ that are the prelude to a new era for this hotel benchmark, which in December 2017 reached its fifth star.

1-Come to the Alhambra Palace, what’s the first thing you’ll do when all this happens? The Alhambra Palace will be waiting for you to enjoy like never before. Sipping a drink on its panoramic terrace, with Granada at your feet. Sleeping wrapped in the Nasrid spirit. Looking out over the Alhambra. Tasting a neo-Nazarí gastronomy… A dream that will soon come true:  https://www.youtube.com/watch?v=cnTk6McrJ7g

2-The Alhambra and the construction of the Alhambra Palace Hotel. Explains the origins and gestation of a dream: that of Julio Quesada Cañaveral y Piédrola, Duke of San Pedro de Galatino. A visionary businessman who at the dawn of the 20th century, when barely 18,000 tourists visited the Alhambra (nothing to do with almost 3 million tourists in 2019), saw the potential that tourism would have and ordered the construction of a palatial hotel that would be the perfect complement to the great heritage emblem of the Nasrid capital: https://www.youtube.com/watch?v=-hFzNlZWB4g.

3-Alhambra Palace. Two intense minutes of images that ‘sway’ to the sound of music that envelops the eyes with the magic that exudes the architectural charm of this hotel. From its crenellated exterior structure to its halls, corridors, restaurant and bedrooms: https://www.youtube.com/watch?v=2ckNDLoCi9Y